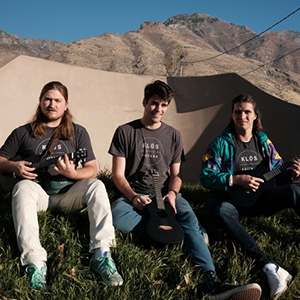 The Bird Watchers – formerly The Naked Waiters are a unique acoustic trio who specialize in the ukulele. With tenor, baritone, and bass ukulele, as well as guitar, the three produce a wide, varied sound.

Kim Bjerga, Clark Holmes, and Andy Nufer have carved out a niche for themselves with tight, three-part harmonies, interestingly composed arrangements and refreshingly diverse sound.

The three came together when a mutual friend, Ben, asked them to serve dinner to him and a date wearing nothing but Speedos. They took it one step further; instead of Speedos, they wore only aprons and bowties. Dinner was served!

To conclude the meal they had the idea to sing love songs to Ben and his shocked date. That night the trio inadvertently become a band – later named The Naked Waiters and now The Bird Watchers.

Word got out, and people started hiring the trio. In 2015 they found an adventurous music scene in Provo, Utah, where they currently reside.

The Bird Watchers’ original tunes broach topics like the town where they met, childhood nostalgia, beautiful locations filled with memories, and even something as simple as a relationship with a pet cat. They have performed and taught all over Utah and the United States, Scotland, Australia, and Canada. They recorded a full-length album after spending most of 2019 living on the Hawaiian island of Oahu.