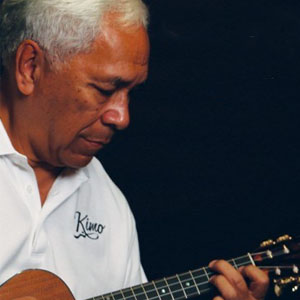 Kimo Hussey is Hawaiian, and was born and raised in Hawaii with an education from Kamehameha Schools.

He graduated from Occidental College in Southern California and intended to return to Hawaii to be involved in music education. The military draft and his subsequent decision to enlist in the Air Force instead led to a career as an American Air Force pilot. During this career, he was both active duty military and then retired from the Hawaii Air National Guard in January, 2000, with a keen desire to re-ignite his interest in music.

Since then, he has recorded one solo ukulele CD – the sold out and much sought after “Eminent Ukulele” – and has participated in several other composite ukulele CDs. Kimo is also an author of the multiple award winning Hawaiian songbook, He Mele Aloha which has sold millions of copies around the world and has been translated into other languages.

Kimo is a former director of the Ukulele Guild of Hawaii, previous Board Chair for Sounding Joy Music Inc. (a non-profit organization specializing in clinical music therapy), and the Board Chairman and Founder of the Pacific Music Foundation, a non-profit organization specializing in Hawaiian music. A practicing musician and instructor with vocal, choral directing and instrumental experiences, Kimo is self-taught in ukulele and has been playing since childhood. He is a much-sought performer and teacher, and travels extensively to ukulele festivals and workshops around the world.