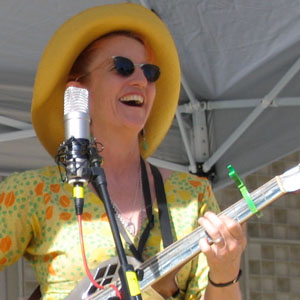 I started playing guitar when I was four. At the age of thirteen I was introduced to the world of traditional acoustic music, when a friend and I stumbled into a concert at Folk Arts Rare Records in San Diego. About 20 people were sitting on the floor under the record bins listening to a kid named Tom Waits play his original songs.

Lou Curtiss, proprietor of Folk Arts and artistic director of the San Diego Folk Festival suggested I quit wasting my time playing “Stairway to Heaven” and listen to some Memphis Minnie. He put me on stage with Sam Chatmon when I was fourteen, and introduced me to Lydia Mendoza and Howard Armstrong. Lou gave me recordings that still influence everything I do on solo acoustic guitar. I soaked up country blues, stride piano, classic jazz and hillbilly boogie. It was a musical education hanging around the record shop.

Thirty years later, I became fascinated with the ukulele. I try to play the same kind of complicated rhythmic blues and ragtime on four strings as on six. I expect a lot out of the little instrument.

“Virtuosic in just the right way, which is to say, in order to realize a musical idea. A very nice unlikely blend of things, accessible, slightly nostalgic, but fresh and thoughtful. ” (CD Baby review, “At The Ukeshack #1)

I’ve contributed to projects in honor of The Mississippi Sheiks, Sister Rosetta Tharpe and Johnny Cash. I occasionally write about music for various publications, including Acoustic Guitar.

My most recent release is just me, singing with uke and guitar; it’s called Solo. All albums available from Hobemian Records